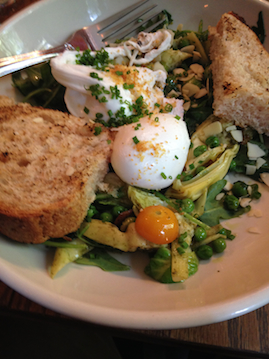 Friday was a bunch of exploration around the neighborhood. More menu research and meals. Ate @

Saturday was a really fun day. Met up with my good friends Kim, Laura, and Grady for brunch at Tipsy Parson. I’ve been wanting to visit this place ever since Kim sent me a text last year saying something to the effect of “this place is so you!” After a 1/2 successful attempt at training it there I ended up walking and finding it by chance. Success! I had this delicious vegetable, poached eggs, and bread dish called The FarmStand. It had peas, brussel sprouts, arugula, two beautifully poached eggs, and tons of other stuff with toast. A good veggie brunch option I’d say. Afterwards we visited the Highline which is incredible. I know NY is a modern international city but it seems to be so fancy and “perfected” around these parts. Cool buildings, awesome folliage, and tons of installations. One in particular was this converted gas station which had been covered in grass and made to look like a farm. We also stopped by Yoko Ono’s Wish Tree.

After that was a little white wine at Trestle on 10th. They have a fantastic outside patio which was really relaxing…unfortunately the service was also VERY relaxed. Grady asked if I was able to perform alongside him at the Laura Beechman Theatre that evening which of course, was a giant yes! That happened around 10, after the Kim Cole standup show which was hilarious. Jinx Monsoon has been performing her new show here, as well as Joan Rivers. Hilarious! After, we met up with a few of Grady’s close pals for some wine. I cabbed back to Aaron’s place where he had the Control record all ready to go, watched a few Janet videos and hit the hay.

A beautiful Saturday if I do say so.

Copyright © 2011 JoeRandazzo.com . All rights reserved. Happily assembled by Wolf In The Wall.